Our Lady of Africa

​Archbishop James E. Quigley appointed Rev. Michael S. Gilmartin to organize a new parish in the neighborhood adjoining Washington Park on the south side of Chicago. Since its founding, St. Anselm’s parish boundaries have been: 57th Street on the north and 63rd street on the south State Street on the west; and St Lawrence Avenue on the east.

At the same time that ground for a combination church and school was broken on 61st Street between Michigan and Indiana Avenue, work on the present rectory at 6045 S Michigan Avenue was also begun.

St. Anselm School opened on September 9, 1910 with an enrollment of 200 students under the direction of the Sisters of Providence.
Ground for the Convent was broken at 6042 S Indiana Avenue to accommodate 20 Sisters. The building was completed on November 11, 1911.

On April 28, 1924, Father Gilmartin’s dream of building a new church was realized when he broke ground at the northeast corner of 61st Street and Michigan Avenue. Although many Protestants churches had been erected on Michigan Avenue, St Anselm was the first Catholic to be built on this spacious thoroughfare. The Romanesque church, designed by Charles L. Wallace of Joliet, Illinois, was built of Toronto brick and Bedford stone. Its stained-glass was decorated with inlaid mosaic.
​
As racial change continued to take place in the neighborhood west of Washington Park, hundreds of Irish families moved away from St. Anselm parish.

On June 2, 1932, the Archdiocesan Consulters unanimously decided to turn St. Anselm’s parish over to the Society of the Divine Word. Rev. Joseph Eckert, SVD was appointed pastor by Cardinal Mundelein who instructed him to provide for the needs of all the people in the parish, irrespective of color.

Under Father Eckert’s leadership, St. Anselm’s Church became a thriving Black parish: by 1936, 500 children were enrolled in St. Anselm’s School under the direction of the Sisters of the Blessed Sacrament.

On September 9, 1951, Samuel Cardinal Stritch dedicated the $500,000.00 center which included a gymnasium, auditorium, cafeteria and facilities for indoor skating and dancing.

On November 19, 1978, St. Anselm’s School was highlighted in a special program broadcast on Channel 2 (CBS), entitled, “The Catholic School in the Inner City.”
​
In June, 1994, the school closed its doors after more than 80 years as an educational institution. The closure has not dampened the spirits of St. Anselm parishioners; however, as we realize the potential ministries that can be carried on with these buildings. ​ 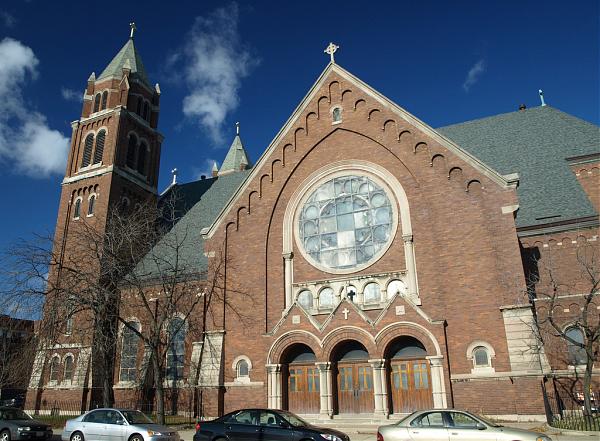